The Taj-Mahal of Homeless Carts 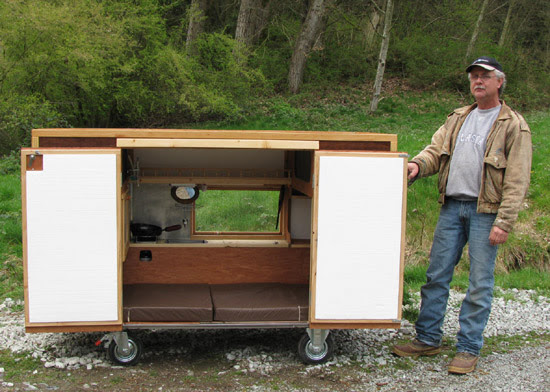 Posted by Theresa Coleman at 11:10 AM No comments:

The Joy of Homeownership and Other Ways to Spend Money

And we aren't finished yet. We are looking to upgrade the trailer to one that I can manage all on my own and one that is easier to winterproof and is more secure safety-wise. That's going to cost as much as I've already spent, plus more.

We've discussed how to manage all this spending; it's going to take a little buckling down on "going out to eat," managing how much we spend at the Rainforest (online, people, think), cutting down on groceries a bit, cutting down on the kid's acquisition of gaming paraphernalia. I really need to sell the books in the garage and dispose of the dead (and dying) appliances.

And (of course) I can think of more ways to spend!
And then there are the things I just want:
Ah, the ways I could stimulate the economy!
Posted by Theresa Coleman at 10:23 AM No comments:

In January 2009, I began to homeschool my children. It was not a hasty decision; but one I did make rapidly. My reasons are varied. I was concerned about the increase of gang activity in the area. I was concerned about my children’s health (both mental and physical). The final straw was a real and substantive concern about the Mathematics curriculum in Gwinnett County and the resistance I felt from the administration when I voiced my concerns.

Therefore, I began to homeschool on Jan 20, 2009. I shortly discovered that there were homeschool associations around in my area and I tried a couple of them out. I decided to join one and attended a couple of meetings. When I was given the application, I decided that I could not sign their affirmation of faith in good conscience. I submitted to them the Articles of Faith from the UMC Discipline and they decided that I was not a suitable match for their group. I would have to agree at this point.

We Believe: The Bible is the inspired and infallible Word of God and is the completed and final revelation. Nothing has been added to it and it is the only source of divine truth. The Bible, in its original form, is without error in whole and in part, including theological concepts as well as geographical and historical detail. (2 Tim. 3:16, Rev. 22:18-19) God has existed from all eternity in three persons: God the Father, God the Son, God the Holy Spirit. Jesus Christ was God come in human flesh, being fully God and fully man, except without sin. (John 1:1-18) All men are in violation of God’s righteous requirements and His holy character, both by nature and act; and are therefore under His wrath and just condemnation. The central purpose of the coming of Jesus Christ was to pay the penalty for man’s sin through His substitutionary death on the cross – the successful accomplishment of which was attested to by His subsequent visible bodily resurrection. (Romans 3:10, 23 – Romans 6:23)
Salvation is offered as a free gift; free to the sinner. This gift must be responded to in individual faith, not trusting in any personal works, but the sacrificial death of Jesus Christ alone! (Ephesians 2:8-9)

My Problems with this statement are not huge. There is more here that we agree on than where we differ. But to enumerate the problems: First, their stance on the Bible is usually called Biblical Literalism. I am not a Biblical Literalist: I take the Bible very seriously and it is my primary source, but see that revelation of God can also occur through reason, experience and tradition. Secondly, they believe in substitutionary atonement, whereas I subscribe to an atonement theology better described as the moral government theory. (The governmental theory teaches that Christ suffered for humankind so that God could forgive humans apart from punishment while still maintaining divine justice.) This statement of belief is a very common one for Christian Homeschool Associations.

My bigger problem is putting a definition on the word "Christian." If I say I am a Christian, why is that testimony not good enough? I have a problem saying that I will hangout with THIS group but not THAT group, because they aren't "Christian enough." As a Methodist, I will NOT turn anyone away from fellowship; not because of personal creed, how they dress, how they smell, their race or national origin. I will NOT turn them away and disallow the shear grace that can be found in Christian Conferencing. We have open arms and will greet ALL. In fact, I even welcome to my church those who don't call themselves Christian: the least, the last and the lost are those who need God the most. Can I get an Amen?

THEREFORE, I want to start a group of Methodist and Moderate Christian Homeschoolers. This will be a Christian group in that we follow Jesus' example. We will eat with sinners and rub elbow with tax collectors. Anyone who wants to join can join. And we will welcome them with open arms and say Hallelujah! AND there is no "minimum" statement of belief AND we won't make you read Chick Tracts and whap you over the head with big 10 pound Bibles. But we will do prayer and devotionals. What do you think?
Posted by Theresa Coleman at 4:30 PM No comments:

This morning I ran across this story World's Tallest Treehouse where a minister built this enormous treehouse as a devotion to God. It's an incredible structure; I just want to go and explore every nook and cranny. Then I read this comment lower on the page:

Did his god tell him that he is acting selfishly with this monstrosity? Does the minister house the homeless / orphans / etc. in this place? He could have used the resources more appropriately and made smaller dwellings at ground level for those in need. It looks like the landscape architect (I’d like to see his portfolio) needs to come back down to earth and get real. Because this thing, well, it just isn’t.

I would love to tell RosyCheeks that the extravagance is the entire POINT. Yes, he could have built little houses for the homeless. Yes, he could have donated his $12,000 worth of nails to Habitat for Humanity. But...
Posted by Theresa Coleman at 10:19 AM No comments:

The girls and I are suffering from a lingering deep cough. We tend to not take care of little illnesses until they become big illnesses; however the "slow-down" of this week did cause a change in perspective.

What are indeed the things that are important in life? I know all the "things" people answer -- you can name them probably as well as I can. However, in the end, it's all about relationships. Period.
Posted by Theresa Coleman at 4:54 PM No comments:

Wonderful video diary entry from Penn of Penn and Teller fame. Great question he asks (paraphrased): How much must you hate me to not share the gospel with me?

I've also watched Morgan Spurlock's "30 Days" where an atheist lives with a Christian family for 30 days. It reinforced my belief about forging relationship -- prompting me to ask one of my favorite questions: How can I be an agent for change if I am not in relationship?

BUT how long must that relationship be in place before you share the good news of the gospel?

Things to think about.
Posted by Theresa Coleman at 11:08 AM No comments:

I blame the kids.
Posted by Theresa Coleman at 10:39 AM No comments:

Between the two churches, the kids, the homeschooling, cello lessons, violin lessons, homeschool academies, orchestras, doctor appointments, karate, Tai Chi and all the other things I fill my time with, it's not too surprising....

I've started knitting. I'm getting great pleasure from it. I'm using looms and am looking forward to the two needle version.

I've purchased my own cello. I have had a couple of lessons. I find it calming. I'm also practicing some jazz piano; mostly the blues.

I'm working on the decluttering projects; I consider them more of "life improvement" projects. There has been progress made; much still needs to be done. I'm considering giving away my entire fabric stash. Yes, the whole thing. I may keep one milk crate because that seems so very radical -- a quilter who is giving away 25 years of stash... but if I haven't used it in 25 years, it's time to go. I'm still working on the book sale idea; it is getting closer to realization. The more of this clutter that I give away, the more liberating it feels.

Perhaps that is what is happening with the blogging as well. I wrote a long time ago about how some of my life changes are like moving the deck chairs of the Titanic -- just moving the furniture around -- not real systemic change.* Life is changing on a different level now. Where things will settle down, I don't really know.