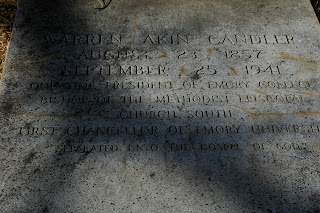 I'm reading again "Secret Formula: How Brilliant Marketing and Relentless Salesmanship Made Coca-Cola the Best-Known Product in the World" by Fredrick Allen. I've skimmed it before, but have picked it up again, now that I've graduated from the University That Coke Built.

In fact, Southern Methodism and Coca Cola are intimately intertwined. Asa Candler, one of the first big-wigs of Coke was the brother of Warren Candler who was the first President of Candler Seminary. That's Warren's grave pictured above, in the same cemetary that holds Bishop Andrews, who originally caused the separation of the Methodist Episcopal Church and the Methodist Episcopal Church South way back before the Civil War.

Robert Woodruff, another big-wig of Coke, is the benefactor that allowed for part of my education and the education of my peers in the UMC. Intimately intertwined.

So I'm reading the book again, and I was struck by a couple of things: First Pemberton, the man who created the Formula, was involved in all sorts of experimenting. One of the ones mentioned was the creation of an artificial food that would be a complete meal and provide all the nutrients that the body would need. I find this interesting, see that Bill and I are currently discussing "Diet in America" -- how we need to eat things that our great grandmothers would recognize as food and to move away from talking about nutrients and talk more about FOOD. The very beverage that people label as the cause of so many problems in America, cola or soda, being invented by a man who was looking for artificial food: That's funny. Ironic.

Secondly, I was pulled into this paragraph:

"The postwar, sharecropper South was a region desperate for remedies of every sort....[widespread disease, malnutrition, lack of sanitation, veterans returning with aching, lingering wounds and maladies]...On top of it all, the region's poverty and rural isolation led to a grinding, dispiriting boredom that made many Southerners susceptible to the relief found in little brown bottles that contained alcohol or laudanum and other opiates."

Well, what else is new? (That is sarcasm for the uninformed.) Very truly I tell you, there is nothing new under the sun. The rural south is still poor; I have been doing some statistical analysis of my district and I am shocked over and over again about how incredibly poor rural Georgia really is. And the fact of the matter is: they've been poor for generations, there is little to no relief agencies for them, they have lack of transportation that makes their poverty even more grinding. Instead of doping up with patent medicines today, it's meth. Easy to obtain the basic ingredients and easy to cook.

It is definitely not a problem that can be solved with a Coke and a smile.

Posted by Theresa Coleman at 11:26 AM No comments:

I don't think I ever realized how important it is to just "sit with it" until I started to preach every Sunday. You just can't rush thinking. You can rush through laundry, cleaning the house; you can put the pedal to the metal and speed along in your car; you can dance faster -- but you can't think faster.

I start the week with reading the text and looking for illustrative material. I exegete, I research, I read, I study some more. By Wednesday, though, I still don't have a sermon. I can't have a sermon until I have some sit and think and pray time.

And this time is not just given to me -- I have to squeeze it out of the week; taking every moment I have to just think. Sure, there is some small amount of multi-tasking that I can do; I can shower and think or fold laundry and think, but I can't homeschool and think.

If I don't sit with it during the week, it shows on Sunday....
Posted by Theresa Coleman at 4:40 PM No comments:

I've been online and doing "Social Networking" for 30 years now. In fact, I was assigned my first email address at Georgia State in 1980 -- and I was given my first computer sometime in either 1981 or 1982 (Apple II). It was shortly followed by an Apple II+, Apple IIe, Apple IIc, IBM PC, IBM AT and IBM XT. It was also accompanied by an acoustic modem, which I very shortly replaced with a Hayes Apple Modem which went all of 300 baud. The day after I received the computer and set it up in the basement, I was online -- checking email and joining BBSs. My first "handle" was SchizoBlonde (yes, hard to believe, I know.) I encountered my first flame-war that year too, on the Atlanta Computer Club BBS. In 1984, I received a relatively permanent email addy cmrlbtp@gatech.edu. I kept this email address until, well 1996 or so.

I could both type and read at 300 baud -- pretty slow it was. I updated the first couple of years to a 1200 baud modem (Hayes, of course!) By the time I was married in 1986, we had an Apple Mac in the living room with a 2400 or 9600 baud modem -- and I was on several mailing lists, USENET, and several email services. Believe it or not, I met my husband online at GT's forum and we exchanged multiple emails that were unbelievably smushy. The party at which we first met was a FUG -- a Forum Users Gathering. So, you might say that I met my husband online.

In 1993-4 we had a big leap online -- the advent of the World Wide Web. I used a text based browser called "Lynks" or something like that, until I downloaded a real browser. I could get to all sorts of information! It was wonderful. Things move fast online -- by the time I had kids, people were putting up pages with dynamic content; things we might call a "blog." In 2002, I started a blog, but I suppose there just wasn't enough interest and until I hit Blogger did I become a Blogger. Now it's Second Life, Meebo, ChatRoulette, Facebook, MySpace, Twitter and so on and so on.

What I've learned it this: because I was exposed to computers at such an early age, all of this came easily to me. (My mom would sit me down in the front of her terminal when I was about 6 to just hit random keys and made "patterns." In later years, I played "Adventure" on the PDP-10 or 11 in 1976.) It is even easier to my kids. The technology changes and morphs; our uses do as well. There is always going to be the "flavor of the moment" -- I don't think that will ever change. What makes this generation different is the fact they EXPECT the change. They understand flavor of the minute.

It's interesting to me that "Business Computers" in our high schools are very program specific. The questions on the tests are usually something like, "What keystroke do you use to do so-and-so?" What a sham! By the time the kids learn these programs, they are already out of date. What to do instead? I don't know -- but I do know it is a different paradigm of learning for our kids. They know how silly it is to memorize keystrokes, especially seeing that the flavor of the moment is soon to change. What we need to start teaching is just "how do I pick up this program?" and "where can I go to find the answers?"

I consider myself a digital native because of the way I have almost always been surrounded by the technology. However, few of my age group are so immersed. We need to realize that what is changing are the paradigms of learning and the paradigms of information transfer. Until that happens...
Posted by Theresa Coleman at 2:10 PM No comments: 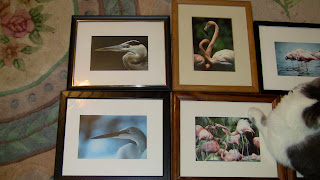 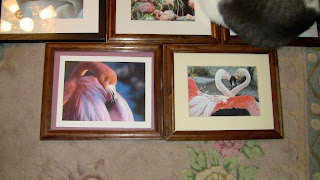 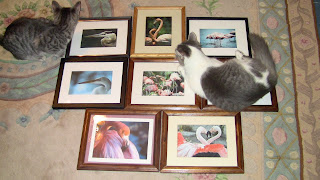 Too much help. The "Art Critics" kept making catty remarks. 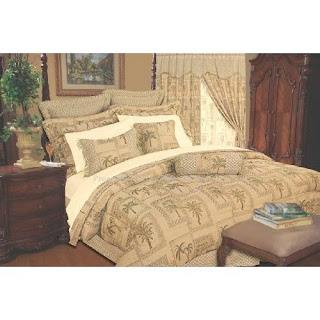 Posted by Theresa Coleman at 2:01 PM No comments:

To Collar or Not

I have been thinking about clerical collars all week -- since I met a delightful retired Methodist minister who wears one. She has an educational therapy center in Loganville and although she's been retired for several years, she wears one to the center every day.
Now, I think she's been clergy for a very long time. In fact, I think she's one of the first in our conference. I can understand wearing one to be set apart -- to signal to people who and what she is, especially seeing that many years ago, women clergy were an odd beast. It would be rather like a college prof wearing a tweed jacket with leather elbow patches, a little bow tie and smoking a pipe. Or like the receptionist at a doctor's office wearing scrubs. A sort of "unofficial" uniform.
I purchased one on a whim a couple of years ago. The shirt fit like a tent, so I have altered it a bit. I wore it once to the hospital (a Catholic one, at that -- and on purpose as a "statement") and I've worn it at a funeral where I needed to set myself apart without wearing robes. I found it grotesquely uncomfortable. I've noticed some Methodists wearing them. I will admit that at first I found it an affectation. We are not terribly a formal institution; more "fellowship-y" than that.
But meeting that clergywoman last week had me thinking -- I did indeed unconsciously view her somehow *differently* because she was wearing that collar. It was a comfort to me, oddly enough. Otherwise, I would have just viewed her as another LOL (little old lady). Perhaps that is the reason I've seen so many women wear the collar in my denomination. I know I acted differently and people re-acted differently to me as I wore one. In a way, I didn't like it -- I didn't LIKE being set apart. I like being "one of the guys." But ... I am indeed set apart. Perhaps it would be a good reminder to me of that. And the uncomfortableness would be a part of it.
Just thinking....
Posted by Theresa Coleman at 10:56 AM No comments:

We have a new trailer!! 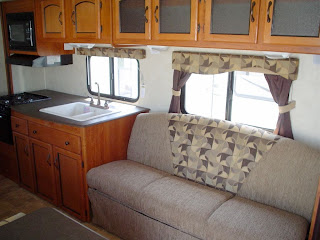 The kitchen -- pretty spacious, compared to our old one. 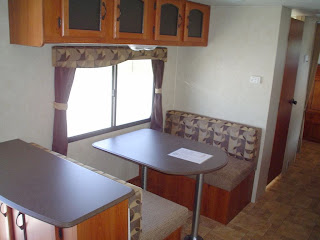 The buffet and table. 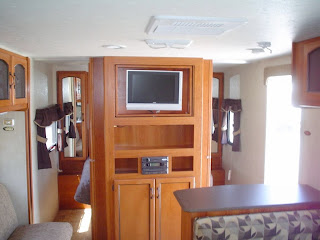 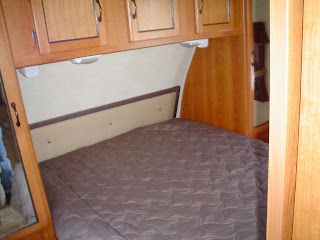 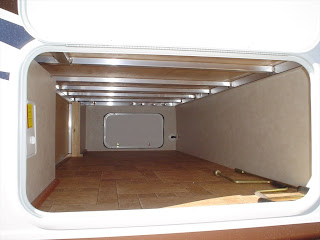 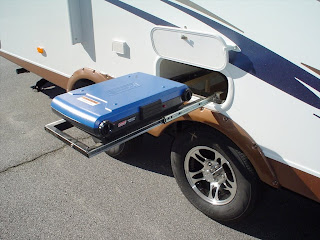 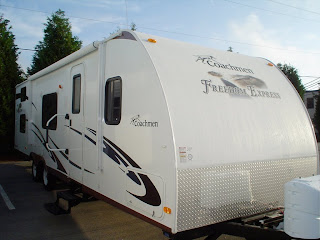 The exterior of trailer sweet trailer. 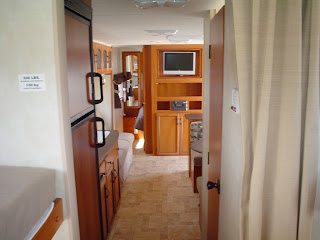 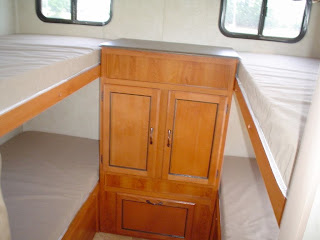 The second bedroom -- 4 twin bunks, wardrobe and place for TV for the kids.

And it's absolutely lovely.
Posted by Theresa Coleman at 2:26 PM No comments: